Hyderabad Traffic Police personnel are extremely busy on the roads doing one of three different things:

Of course, during monsoons and other reasons that obstruct traffic flow, they do their best to ease up things for commuters. What interested me was #2 – the fact that at every road junction and signal, we have a traffic cop who keeps clicking photos of violators (no helmet, triple riding, cell phone usage etc) and then issue the violators with e-challans with proof of violation. So I filed an RTI to check how effective this drive of Hyderabad Traffic Police is. And the response received from them is quite surprising. The numbers they shared are huge!!

In the past 18 months, they are filing e-challans almost at the rate of 4 lakhs per month. And in the months of May-19 and Jun-19, they crossed 5 lakh e-challans. This is a staggering number. What I found even more surprising is the number of violators who are paying up their fines. Nearly 50% of the e-challans are paid up. Below graph depicts the last 18 months data which Hyderabad Traffic Police shared as part of RTI response. I suspect these numbers are only for Hyderabad, which means Cyberabad division numbers are not even included here.

Of course, all these numbers will become even more interesting if we include the e-challan amounts violators are paying up each month. Rs 4.5 Crores!! Yes, that is the total amount paid by violators just in the month of Jun-19. Highest amount paid was in Mar-19 when it crossed Rs 5 Crore (as if people wanted to end their financial year commitments by 31-Mar). 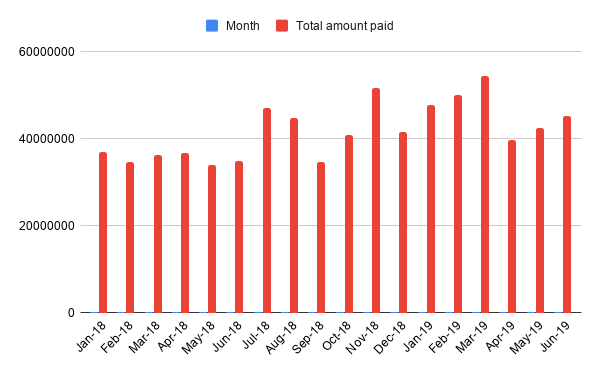 With the new Motor Vehicle Act Amendments, 2019, fines for traffic violations have been increased almost 10 times. If the above trend of violations continue, Hyderabad Traffic Police will most likely be a very successful company for the Government, with an annual turnover of Rs 600 Crores 🙂

As citizens, lets do our bit on roads: